Welcome to Finks Quality Used Cars located at 2 Merriam Street in Zanesville, OH. Please call us at (740)453-1772 to arrange a test drive or visit our website www.finksqualityautos.com to view our complete inventory.

The most noted '71 hemi'cuda in competition, however, went to a noted Zanesville, Ohio Super Stock racer named Carroll Fink, who ran a car resale franchise with his brother Gale.

Fink had won the 1970 Super Stock Nationals and a number of NHRA event titles in an 'uncompetitive' 1967 RO-package car in SS/DA. In early 1971, a 340 'cuda convertible that had been wrecked was totaled out under warranty and then turned over noted Detroit area car builder Tom Tignanelli under factory direction for rebuilding into a '71 Hemi'cuda droptop specifically for racing. It debuted for the 1972 season, and Fink would go on to record a fair number of final round appearances that year, including a victory at Sanair, Quebec  at a new race called the Le Grand National, which had been added to the NHRA schedule  in 1971.

Incidentally, there was at least one 'real' 1971 Hemi'cuda that ended up on the drag strip for more than a time trial; this was a car owned second-hand by Nick Masciarelli, who, like Fink, was from Ohio. After buying the car, he also went with Tignanelli for power, and the car was raced for a handful of seasons before being garage-retired. It also ran classed in SS/EA and once even raced Fink's version heads-up (unsuccessfully) at the 1972 Super Stock Nationals at York US30 Dragway. Fast forward to 2014, in restored pristine condition, the Mascairelli B5 blue 'cuda finally became a winner; it took home $2.4 million dollars at an R-M Auctions event in Arizona to record one of the highest-ever public selling prices for any post-1960 American production car. A similar car at Mecum Auctions in Seattle did a million more than that, hmmering down at $3.5M in June 2014. 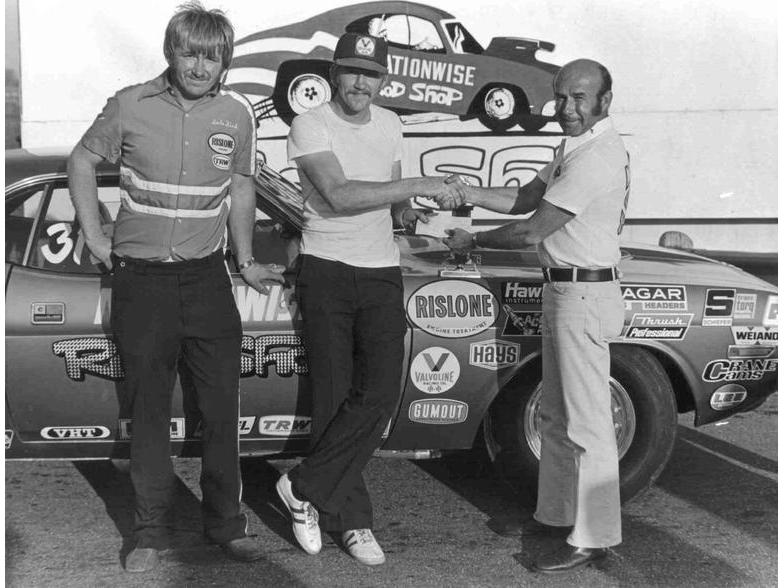